So there has been much back and forth and opinion-ing between crew, experienced sailor friends and our PHRF handicapper. Whats the best setup? We raced this year with a mylar main and kevlar/mylar 163%. We definitely did better on the light/moderate nights and did alright overall, taking 3rd in our division in the CYC series and 3rd overall in our division in the Gulf of Maine racing circuit. All this despite taking a killer rating hit, from 144 to 136! 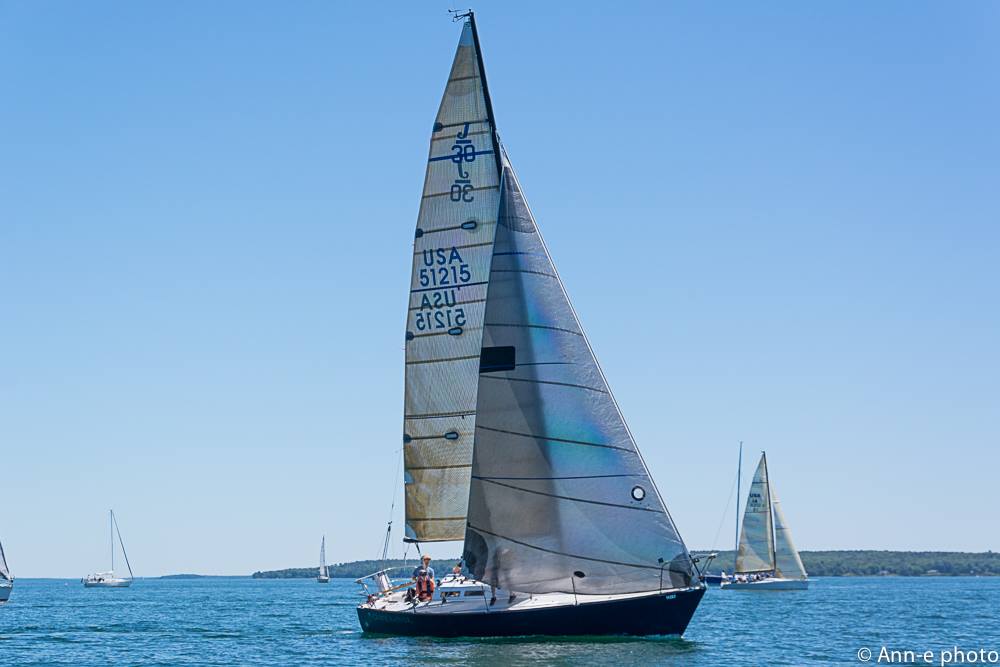 So the question is this, is it better to have the extra grunt in the light stuff with the 163% or put a 155% on the furler and get the rating boost? Also, is it true that I wouldn't get a rating boost if I put a kevlar 155% on the furler because it's an "exotic sail?" what does everyone think? How do you set your boats up for phrf?

If you have predominantly light air when racing then the 163 is the way to go. A Dacron sail on the furler is ok when new and as good as a laminate, it just ages with the shape changing.
Posted By: JBiermann

Coast of Maine is a tossup, felt pretty balanced last year but we had several "sporting" race days. The 163 was a real handful when it started to get truly fresh but we had a hard time telling when to switch out to the blade. Wind shifts like crazy in Casco Bay and I'd hate to loose a few kt and be stuck with our little sail out.

Putting some wind instrumentation on this year (so I at least have some hard data) and a new, larger gps. Speaking of which, where do you mount your gps? Bracket mounted on the bulkhead next to the companion way always seems to get tripped over by lines and the crew and is quite the bit less useful on one side than the other. Flat mounting to the bulkhead would only fix one of those issues.
Posted By: Chris623

I agree with Bill... can't imagine giving up the big sail in my area. If I lived in an area with heavy wind all the time, I'd have to rethink of course. For me, the answer is my #2, even though it is dacron. I won't leave the dock without it anymore!

As far as the GPS question, mine is at the nav station, however, I can put key data up on my Nexus NX2 multi's on the bulkhead. Depending on what you get, some of the newer GPS units can display data from a NEMA-2000 bus if you have it, and the whole screen can be duplicated with WiFi on a smart phone or tablet. There are ways to get data from the NX2 server serial port to a smart phone as well, but I'm not sure how to make it all happen quite yet. A third display at the mast might be eventual way for me to go.

If you don't care about One Design, the modifications I made to Natural High are the best thing I have ever done. Desperado (ex-Gracie) followed suit even more aggressively.

The yachts major strength is up wind in moderate to heavy, and its weakness is downwind in light to moderate. Working from that principal I justified the following changes:

- Exchange the PHRF hit from the headsail to the mainsail. i.e. Decrease the headsail and add to mainsail by the same score, or even go Code 7 on the mainsail (like Desperado did). The justification is that headsails do nothing for you downwind, but the main is up all the time. May be a slight cost upwind in 3-5 kts, but the extra mainsail up in the downwind I felt helped a lot. Plus the extra roach makes it super tweaky for fine tuning for extra speed. The bigger main also makes the #2 a much more valuable sail with a bigger wind range as you can't hold the #1 as long (unless you like flogging the piss out of the mainsail)

- By far the biggest performance boost I got was bumping the spinnaker hoist by 3 feet and putting a taller kite on. Just to where the taper starts. The mast is a tree-trunk compared to similar sized yachts... it can take the force that far above the shrouds. My spinnaker luff length is now 37.25', and the additional power just rips downwind in the heavy air, and is actually more stable than the old "thimble kites" because the width to height ratio is much skinnier (but the total width remained the same) and the head is less shadowed by the main. Helps a lot in the lighter winds having the kite higher and bigger.

There have been some recent changes in the code breaks at our PHRF authority that has caused me to go up and down, but currently my total rating hit has only been -6 from OD config. I'll trade that any day for the ability to sail downwind at 8 knots in 15 kts of breeze (steady 9s and 10s once the wind is up over 20 in flat water with no wave surfing).

We have been winning so something is working.

What size pole are you using with your bumped hoist? If oversized, by how much?
Posted By: NaturalHigh

Originally Posted by Tcwippy
What size pole are you using with your bumped hoist? If oversized, by how much?

Originally Posted by NaturalHigh
- By far the biggest performance boost I got was bumping the spinnaker hoist by 3 feet and putting a taller kite on. Just to where the taper starts. The mast is a tree-trunk compared to similar sized yachts... it can take the force that far above the shrouds. My spinnaker luff length is now 37.25', and the additional power just rips downwind in the heavy air, and is actually more stable than the old "thimble kites" because the width to height ratio is much skinnier (but the total width remained the same) and the head is less shadowed by the main. Helps a lot in the lighter winds having the kite higher and bigger.

Wow. Do you know how many times I've cursed all those masthead kites I race against on Wednesday nights? I was always worried that I'd break my rig if I moved the hoist any taller. But if your rig has not busted in the Squamish breeze, I figure I'd should be OK in English Bay. Now you've given me something to think about.
Posted By: last fling IV

This worked very well in Seattle for distance racing. We were usually close spin reaching. I went up the mast with an external bock and used a .6 poly reaching chute. I also used a 153 jib and shortened the pole by a foot to end up with the same handicap. Jack at North sails Seattle probably has the measurements. If not, work with your handicapper. The North reacher would actually go to weather if needed.
Posted By: Tim Lawton

The main thing I learned is sail flat, If that meant dropping down more than others may do for the same conditions, I found that I was as fast.


The other thing I found out about racing PHRF is no matter how bad I'd beat a Catalina 36 TM (we rate level here) he'd blow me off down wind.

If I was racing as hard as I used to, I think I may go for a taller kite and take the 3 second hit....


Alas, the boat is for sale, so I really don't want to spend a bunch of money fooling around with the rating committee....